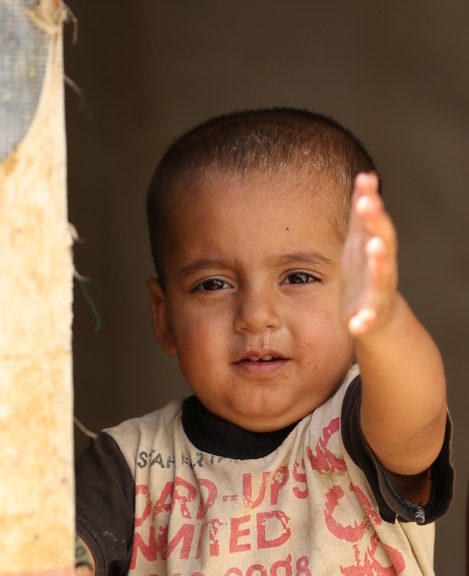 Project Cake began in this way…

Nexus has been serving Olive City refugees in Tree City since 2014. Some of the refugees have become our coworkers. When our Chinese co-workers arrived on the field in Tree City, they knew no Arabic at all, but now they converse with Middle Easterners in Arabic. Despite differing cultural backgrounds, because of Christ’s love, the team members all care for one another and get along well together.

Now that we have established relationships with the refugees, two of our Olive City coworkers introduced us to the desperate needs of Kurds fleeing from the north. Our Heavenly Father prepared ten of those precious surviving families for us to meet and gave them a second chance, a chance to be “reborn.” So, we are happy now to give them a bit of help!

Having gone through years of disastrous war, people who have narrowly escaped death and survived could be said to be “reborn after disaster.”  What does “reborn” actually mean? Jesus said, “I tell you the truth, no one can see the Kingdom of God unless he is born again” (John 3:3).

By God’s grace, Hezekiah on his deathbed received a second chance at life; he received healing through the “cake of figs” prescribed by the prophet Isaiah. (See 2 Kings 20:7)

The Aim of Project Cake

Due to the nine-year civil war in Olive City and the Islamic State, scattered districts became controlled by different groups. Then in January 2018, the neighboring country joined “freedom fighters” they had been supporting within Olive City and invaded, establishing control in northwestern Olive City. As a result, many people were compelled to flee their homes and move to nearby cities.

A Homeland in Ruins

Many cities and villages in the northwest region of Olive City had become occupied by the Islamic State. Although those places have been retaken, homes of residents and government buildings are severely damaged, many live mines remain in the surrounding areas, and there is even still a lot of unexploded ordnance in and around residences. Refugees and even residents have to face these great perils every day. In addition, public health and medical facilities were military targets, and biochemical weapons were used. So the present situation remains very grim. Parasitic disease carried by sand flies and causing ulcerated skin exacerbates some long-term illnesses and is a widespread problem.

A Story of Survival

Faki gave the following personal account March 26, 2020. She is a member of one of the families receiving our assistance:

“When we were being bombed, it was very hard to face every day. Then for two years, we wandered around homeless. During the time we were fleeing on foot, my husband got lost — in fact many people, and even their children, got lost. Along the way it often rained and the weather was very cold. We often slept in dark rooms. We experienced hunger and terror. When the army of the neighboring country was coming after us, we ran from one village to another and finally came to a city near our homeland. We want to express many thanks to the people who cared for us; and even more, we want to thank God and the people from Nexus who prayed for us. Your financial assistance seems like very simple thing, but to me it is a lot and is very important; also my son is very happy because of it. I thank God that he let you know me. I feel afraid at this time and don’t know what the future is going to be like, especially because now we are also facing the pneumonia epidemic.”

Who is willing on behalf of Christ to become a “cake of figs” for them?

I am willing to give a one-time offering of ____

Make your cheque out to Nexus Mission Limited.

To Donate in the U.S.A., please make your check out to “Nexus Mission.”

* A US donation receipt makes your donation eligible for tax-free status. US Federal Tax ID #36-4631486

You may also make a secure donation online to our PayPal account at: